The United States in North America is the global leader in the PC Internet Web1.0 era, and China in Asia is overtaking in the mobile Internet Web2.0 era, while the main force of the development of web3.0 is still in Europe and the United States, and Web3.0 is becoming a new field of “fighting” for the Internet giants in Europe and the United States in 2022. The next decade is the golden age of web3.0 development, instead of hesitating in the retreating web2.0, why not stride into web3.0 and find your own opportunities and gold?

MotorN Project Background and Mission Vision
MotorN project team creators are all from NUS, specializing in internet technology development, business disruptive innovation research and practice, with years of experience in HP’s industry solutions, and the advisory team behind them are proficient in carbon emission reduction solutions and Game-Fi business model combing.
During the course of their work, they passed by the Johor Bahru Causeway in Malaysia and Singapore and encountered hundreds of thousands of motorcycles commuting to and from Singapore, leaving behind a pile of uncomfortable and emotionally draining exhaust fumes. With the encouragement and support of the professor, the creators decided to take action to try to change this bad situation, and creatively proposed a new business model of “Move & Play & Earn incentive mechanism + electric transportation + carbon economy” to motivate people to change, advocating people to actively adopt electric travel to promote carbon reduction, protect air quality and nature, reduce The MotorN project is the newest addition to the Web 3.0 green mobility track.
MotorN’s mission and vision is to promote sustainable and healthy human development by driving change in the global carbon neutral green mobility circuit. 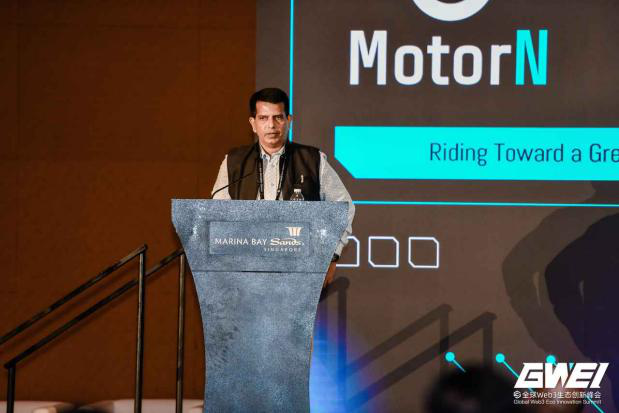 Web3.0 newcomer, MotorN has unlimited possibilities
MotorN is a new Web3.0 Move & Play & Earn green travel lifestyle app, with built-in GameFi and Social-Fi, NFT mall and e-commerce, and fully linked to the real economy of the tram, providing continuous internal and external circulation value support, mainly for the hundreds of millions of global green travel (daily commuting and leisure fun It is built for hundreds of millions of green travelers (daily commuters and casual gamers), NFT enthusiasts, professional race fans and Web3.0 users worldwide.
This is a new chain game that perfectly combines virtual and reality, but more than that, it is a shout to global citizens, in order to effectively promote people to pay attention to carbon emission reduction from practical actions, to protect the atmosphere and nature we depend on, to reduce pollution, to motivate global players to actively put into practice, by driving or taking various electric transportation green travel, while allowing the majority of action users to get incentives and carbon credit asset compensation and The entire network community thrives and adds value to bring immediate benefits and considerable medium to long-term gains.
MotorN Phase 1: Players will begin the Web3.0 journey of exploring freedom by configuring E-Motorcycle NFT. Genesis NFT Life is planned to be issued on the Coinan Smart Chain, and players will realize interaction and experience by going on the chain. Incentives and carbon credit asset payouts are earned through extensive rides, rides or races (no restrictions on transportation in this phase).
MotorN Phase 2: Players can configure the new Utility NFT series (including but not limited to: E-Motorcycle, E-Bike, EV, E-Scooter, license plate and various peripheral equipment, co-branded products, etc.) and receive the corresponding physical products and services for free, connect to the corresponding models through the built-in car chip device, APP Bluetooth, and Calculate the mileage and speed of the ride, so as to get more incentives and carbon credit asset compensation (while the users of the first stage can still continue to use the previous method and get the corresponding incentives).
MotorN Phase 3: Launch Social-Fi, through extensive cooperation and related activities and competitions around the world, to more quickly influence people from all walks of life to participate in the community and take action to embrace green travel and participate in the carbon neutral movement, so as to promote more users to become green travel enthusiasts as soon as possible and receive the Global Green Citizenship Medal of Honor, thus promoting the entire community This will help the whole community to realize the true green mission and vision, and enable users to get more incentives and carbon credits to reward them for the long-term health of the MotorN ecosystem.
MotorN is disruptively innovating the business model of “Web3.0 Game-Fi + NFT Mall + Real Economy Combination”, aiming to be the most influential change agent in the Web3.0 + Global Green Mobility track in the next ten years. 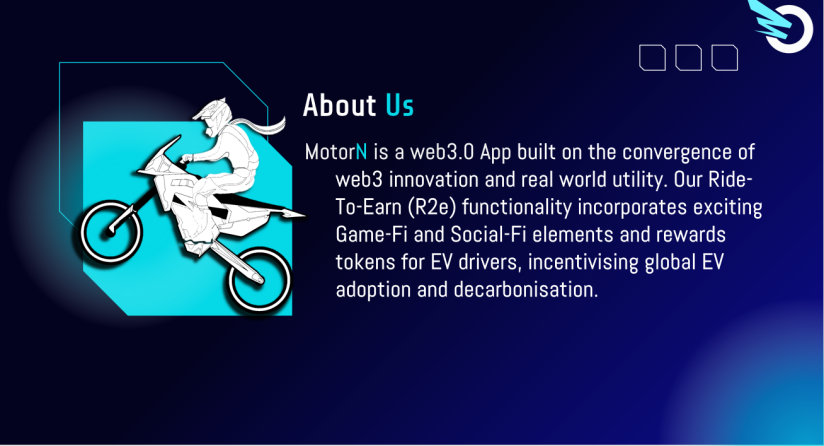 Latest Important News
1、MotorN has now reached a technical cooperation with ChainLink to ensure players have a more secure, transparent and fair usage experience.
2、MotorN has now discussed strategic cooperation with a listed company in the travel industry in Hong Kong, China, with the goal of opening up travel routes mainly in Southeast Asia, Japan and Korea.
3、MotorN plans to open MotorN offices in the United States, France and other countries in 2023, and develop training programs to introduce newcomers to the Web3 ecosystem in order to create approximately 10,000 new Web3 jobs.

MotorN APP 1.0 is planned to be officially released in September, and related promotional activities will be held in the US, France, UK, Korea, Southeast Asia (Singapore, Vietnam, Philippines, Malaysia, India, Indonesia), Japan, and Taiwan/Macau/Hong Kong, etc. We welcome elite partners from all walks of life around the world to participate.

Finally
It is believed that if every user participates in MotorN’s “Web3.0 Move & Play & Earn Incentive Mechanism + Trolley Economy + Carbon Economy” community ecology, and if they are positively influenced by it, a global wide circle-breaking effect will definitely be formed. At the same time, the community has strong exogenous economic support and the Web3.0 community is constantly driven, which can promote the long-term sustainable and healthy development of MotorN ecology and continuously generate community value and user value.

One day in the future, through MotorN’s FGT token payment, you can buy the freshest organic vegetables and food, pay for rent, utilities, internet, phone, credit card bills, Starbucks coffee, McDonald’s burgers, fries and Coke in any city in the world, or buy a luxury tour package to New York that has been put on hold for a long time by the epidemic, or a Chanel bag purchased from the Champs-Elysees in Paris. Chanel bag from the Champs-Élysées in Paris for the goddess of your dreams, customize your own elegant Armani suit, or reserve a new NFT-anchored trolley at MotorN showrooms in Europe and the US, the future is about to get very interesting and exciting!

Riding on many world-class wind gusts and unique business model design, MotorN is trying to fall in love with the people of Europe and the United States with a bang and never break up! All in Web3, leading the Web3.0 era in Europe and the Americas, is expected to give birth to a phenomenal national super application!
I believe it’s only a matter of time before MotorN takes the world by storm! Let’s wait and see!